Forside / News / They give amputees a boost 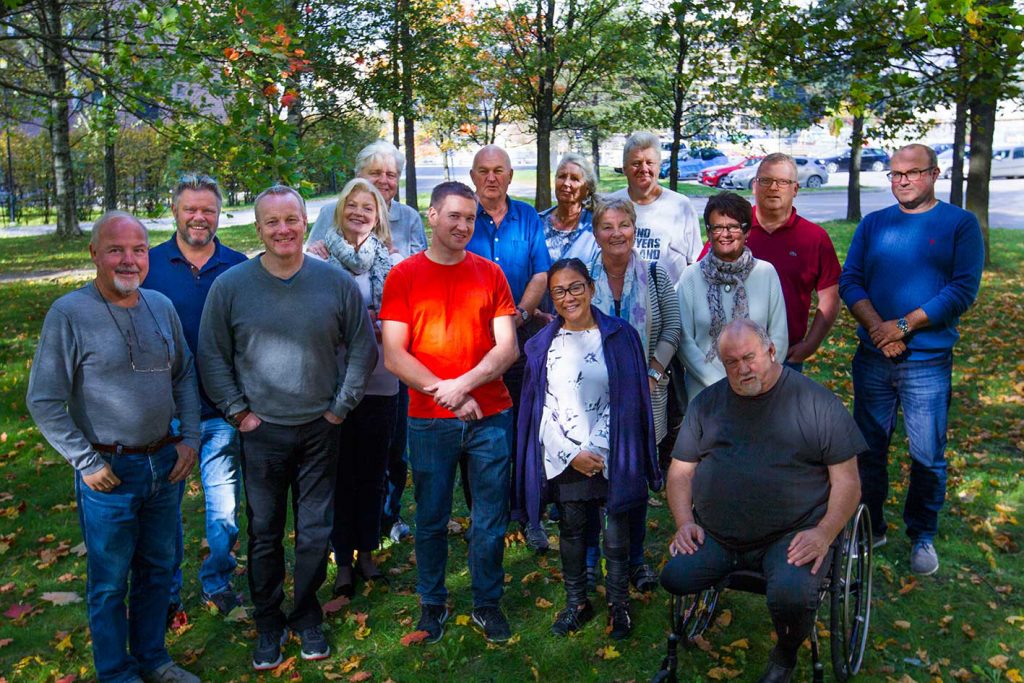 This is how it was when Momentum this weekend (Friday 29 September – Sunday 1 October) held a new in the series of its peer courses, in a hotel at Helsfyr in Oslo.

A Momentum peer is most often an amputee who is well back in everyday life and thus has the ballast to meet a new amputee to help – by listening and informing and inspiring – that the new amputee sees light at the end of the tunnel and finds the way out.

But a Momentum peer can also be a relative of an amputee – a relative who has experienced that it is not necessarily easy to live close to an amputee and thus can give useful tips to new amputees’ relatives.

A lot of work during the peer course, but also good meals and a lot of nice chat. Here we see part of the course group at Saturday’s lunch table. Photo: Hans Hekneby Reinertsen.

Peer work is thus a kind of make-life-good-for-others work and is a high priority in Momentum, the association for arm and leg prosthesis users. The association also includes people who use prostheses for reasons other than amputation.

This weekend’s peer course was the second in a current series of such courses; the first was held in late winter this year, the third to be held next February.

But Arne Wilberg, leader of the Equality Committee in Momentum, says: “If the interest becomes too great, we must run another course.”

In any case, it is in the cards that Momentum will in the future start new series of peer courses, explained both with a natural drop-out of active peers and with the association’s goal that active peers should have their knowledge refreshed every five years.

This objective is based on the authorities requiring quality assurance of the peer service in an association such as Momentum.

Wilberg assures himself that peer work is useful and is valued by new amputees and relatives: “We get a lot of feedback on it, it is only positive, what we hear.”

Momentum has roughly counted 80 authorized peers today and is thus, according to Wilberg, well shod, even though he sees that some parts of the country have less good coverage than others.

The uneven distribution can be offset, Wilberg explains, in that a peer from a Momentum local team can be sent far away to take on an assignment in a place where there is no local peer who can step in.

Read more about peer work in Momentum
Do you want to meet an equal? read more here